Its roughly 5-minute organ-opening—according to O’Dwyer recorded in an abandoned friary—is without a doubt one of the most beautiful, most immersive things in my recent memory. The quasi-sacred aura of the pipe organ instrument emanates from this festive piece of retreat while at the same time tying in with one’s own submerged memories of semi-voluntary church service attendance. From there on, things become increasingly quieter. The remaining thirteen minutes of this collage of four pieces call for further contemplation, culminating in the seemingly fleeting, feathery “Piano and vocal improvisation at St Mary Of The Walls church, Colchester, England”, which sounds like a half-remembered Grouper concert.

Not an entirely uninteresting aspect of O’Dwyer’s music is the ambience sound—the “sonic potential of the space” as she states herself—of the respective recording location. In her choice of space, which can be a cave, an abandoned building, a monastery or a church, O’Dywer always looks out for the, it seems to me, remote and mysterious, for places of a certain mythic aura. And in that, in seeking out these cultsites, she almost appears like a pagan pilgrim; for polytheistic deities have their permanent residences, after all. As in Safely Adrift, there always seems to be some kind of a background presence, sometimes expressed—depending on location and space—in low hums and drones, in sparse birdsongs, in the rush and gurgle of water, in the drippings of a cave or the sound of other people, incidentally present in the moment of recording (in her utterly fantastic Music For Church Cleaners tape, you’ll literally hear people in the background vacuum-cleaning.) It can, therefore, be described as a separate thread running through her music, sometimes evoking similar vibrations of Moniek Darge’s environmental collages in Sounds Of Sacred Spaces—where all seems to have its place and justification, all is part of a great whole. (be)

Whenever I care to drift away completely into the emptiness of my mind, I listen to Neroli. Over the course of an hour Brian Eno carefully fills up the listening space with a sequence of single notes. Through the exemplary use of cavernous reverberation, the virtuoso of minimal music creates an ambiance that encourages a rewarding descent into a calm and relaxed state. Neroli does such a great job at suspending time, that even our hasty world feels like a place of heavenlike serenity, while one is being enveloped by the hypnotic tones on this sonic therapy session. (av)

A long-time favourite of mine. Admittedly, you have to bring some patience to the table for the intravenous administration of highly concentrated nostalgia of this slow-moving ambient/vocal piece to kick in. It’s probably best consumed in moments of half-sleep when the observing and controlling tires and consciousness lose its hold and impulses from the earliest period of life rise up. Alternatively, it also works on car rides. I remember a long, overnight drive, and as it was already starting to lighten up outside, “Banteay Srey” (namely a Hindu temple ruin in Cambodia) was playing on a seemingly continuous loop on the car stereo—a precious moment of clarity that I somehow wish I had captured. Next to me in the passenger seat, a person close to my heart was asleep, presumably dreaming of flowing, bright colours (or of a tax return) while the ethereal vocal sample flickered in and out of that person’s consciousness. I further remember that after a while, a pale blue light began to give the view of the flat, straightened landscape with all its allotments and German flags, the scrubby alluvial forests and brown-black moors—it is what it is. (be)

David Naegele – Journeys Out Of The Body

Like other performers of New Age Music, David Naegele creates his songs with the goal to enable the listener to transcend the normal waking state into a deep state of relaxation. Released on tape, this gem of ambient music brings with it as a pleasant addition some delicate and fine-sounding tape hiss, which unintentionally enhances the soothing effect of this recording. The bell-like tones fill out the aether and inspire a deep sense of calmness, while spacious and long-lasting synthesizer soundscapes carry you along a celestial journey to a place of peace and harmony. (av)

“Sol Mara” is a 20-minute minimalist ambient piece based on flute-samples. David Jackman, mostly known for his industrial/drone project Organum (in the 1980s also regular collaborations with Steve Stapleton from Nurse With Wound), lays out a theme here, and varies it only marginally, almost imperceptibly, throughout its runtime. Originally released as a ‘bonus LP’ on German experimental label Dom Bartwuchs (Hirsche Nicht Aufs Sofa!) in 1989, it can be received as more than just an afterthought. It may be super repetitive and rather lo-fi, yet there’s an arcane, timeless shimmer surrounding it; a hidden quality. In its absence, it is as unassuming as it is multiple, and I don’t think there’s anything like it out there.

Sometimes I think of Sol Mara as the aural equivalent of a place you left a long time ago, to which you may return, but one that, above all, you will have within you everlastingly. (be)

When the eye becomes still, and one’s thoughts gradually disintegrate, then this can only mean one thing: exposing oneself to the music of Eliane Radigue. The effect her drones ever since had on me has always also been a physical one: if you listen to her records (especially the releases up to the turn of the millennium) on proper headphones, you feel afterwards as if you had just crawled out from under a bell jar, as if you were thrown into the world anew for a brief moment; as if the hearing had to adapt to the outside world all over again. Up until now, her music can, therefore, be like a corrective, a kind of sonic palate cleanser to me.

“Jetsun Mila”—clocking at almost one-and-a-half-hours—is in its first half as stoic as usual, resting in itself, with the patented, sonorous modulator drones of its creator. In the second half its ductus is becoming rather sacral—a monk’s chant drawn out to infinity runs through the last half-hour—, ‘telling’ the story of Tibetan yogi und poet Milarepa and his spiritual endeavours through ascetic practices. Just looking at the cassette cover of Jetsun Mila already should give some sense: The (seemingly) ice-cold breeze from the mountains, the crystalline shimmering rock, the mirror-like surface of the lake—all can be read as transcriptions of a mystical state of mind.
It is an album that has accompanied me for many years, moreover, it also was my first encounter with Radigue’s music. Probably that’s why it has such an epiphanic value for me.

If man is fundamentally an escapist being, and art in all its forms gives expression to this trait, then Jetsun Mila is the sonic offering to this in its purest form. (be)

The dreamy and cave-like ambiance is perhaps the most fantastical aspect of this rather exciting release in the oeuvre of Harold Budd. While the general tone of Luxa is laid-back and hazy, there are some tracks which conjure up a more or less eerie, yet for some odd reason familiar, atmosphere. A prime example of this to me are “Agnes Martin” and “Chet”. I couldn’t think of a better album for lulling me to sleep. There are some voices that call Harold Budd boring and limited in his array of ideas and I agree with them. But he is so in a very authentic and skillful manner, lending his works a peculiar and very recognizable quality. (av)

The Oregon based New Age Artist Sam Jones describes his astral music as a tool to help you enter your personal Enhanced Lucid Realm. A place which is free of the distractions of the outside world. The Celestial Stairway acts as an access point to this visionary place in which we can achieve total control of our reality. On this beautiful record consisting of five lively and ethereal pieces of electronic music, you receive a high dose of sonic narcotics; enough to knock you out of your fleshly socks off into the vast depths of your inner space. (av)

It sounds like some trite trope by now, but to me, the music on River Without Banks acts as an antidote in these subdued days of uncertainty. Yet I’m not even sure why it appeals to me so much, calms me down in such a manner.

Svirsky, a Russian-born, Washington-D.C.-hardcore-socialised, classical composer in his early 30s, draws his inspiration, amongst other, from the Spiritual Jazz of the Coltranes or Sun Ra, from Pauline Oliveros’ ideas and practices of a ‘Deep Listening’ and the icy reductionism of European avant-garde composition. If I’d had to cite my own references and associations, it would be relatively difficult for me, as the music (an arrangement for two pianos) seems to float a bit beyond my interests and listening habits. I could say it is like a mix of Charlemagne Palestine and Joanna Brouk, yet it sounds neither as ecstatic nor as lush as they typically do. In its habitus more distant, maybe more intellectual, his music, however, undoubtedly possesses a pleasant warmth and mournfulness, is, as he states himself in a talk with Michael Pisaro, radically romanticist at heart.

Thankfully, before any melancholic gesture becomes a shallow attitude, River Without Banks ends after some 40 minutes. It could well be most listened to album these days—a little gem. (be)

In this first of a series of four volumes, Randall McClellan invites us to a calming journey to the core of our spiritual essence with a minimal instrumental arrangement of merely his voice and a Moog synthesizer. The track Sirius evolves slowly from a meditative and almost static composition accompanied by breathtaking religious chanting to a more rhythmic, yet subtle exploration of the Moog, opening up the doors to the deeper regions of the mind. As the title of this series of minimalistic recordings suggests, Randall McClellan intended to evoke the healing powers of music with the improvised pieces recorded between 1977 and 1983. The labels New Age and Esoteric which are connected with Randall’s works might bring across the impression that this is nothing more than another generic work of shamanic mumbo-jumbo, but don’t be fooled – once absorbed by the tranquil sounds of the New Age, you’ll find yourself slipping away into a more hypnotic, subconscious state of mind. (av) 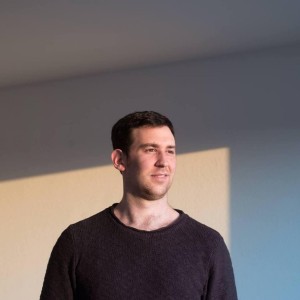 By subscribing to our newsletter your taste in music will increase by 28%. You can unsubscribe at any time.